SUBPAC AT ¡VIVA LA EVOLUCIÓN! -THE VIRTUAL RAVE IN HAVANA

On October 6th after Oculus Connect 3, VR Playhouse and director Fifer Garbesi reunited for an intimate celebration of the completion of ¡Viva la Evolución!, an 11 minute long VR documentary on Cuban underground raves.

Friends and family gathered, speculating what would await them in the virtual world. The rave was in a castle by the ocean, an international gathering of DJs celebrating the lifting of the embargo in Cuba.

Headsets were distributed along with SUBPAC M2’s. What would a virtual rave be without booming bass?

After a countdown, the experience began, plunging the viewers simultaneously into the life of Joyvan Guevara, the godfather of Cuban raves.

“The pounding began quietly, as if we were standing in line for the hottest club and finally we were allowed entry in a rush of sound,” one viewer recalled.

Bobbing their heads to the silent music around the room, the audience danced in unison in a far-away reality. 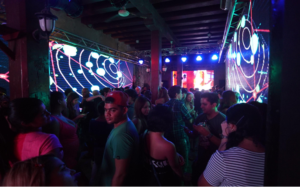 Fifer believes raves are about creating a unified consciousness. “It was critical that we organize this as a synchronized screening to emulate that feeling.”

“I was standing on the brink of the future,” one man remarked.

This event was made possible by SubPac, WeLens, the Upload Collective, Mario Kenyon, and Two Bit Circus.

Stayed tuned for public screenings of ¡Viva la Evolución! at www.thevirtualrave.com and www.vrplayhouse.com.

For more information about how you can use SUBPAC with your VR experience visit our FEEL VR page.

Sign up for the latest news straight to your inbox:

© 2022 SUBPAC.
SUBPAC, SUBPAC FLOW, SUBPAC OPTIMIZED, FEEL IT and the hand symbol are registered trademarks of SUBPAC INC. All other trademarks remain the property of their respective owners. Privacy Policy | Terms and conditions