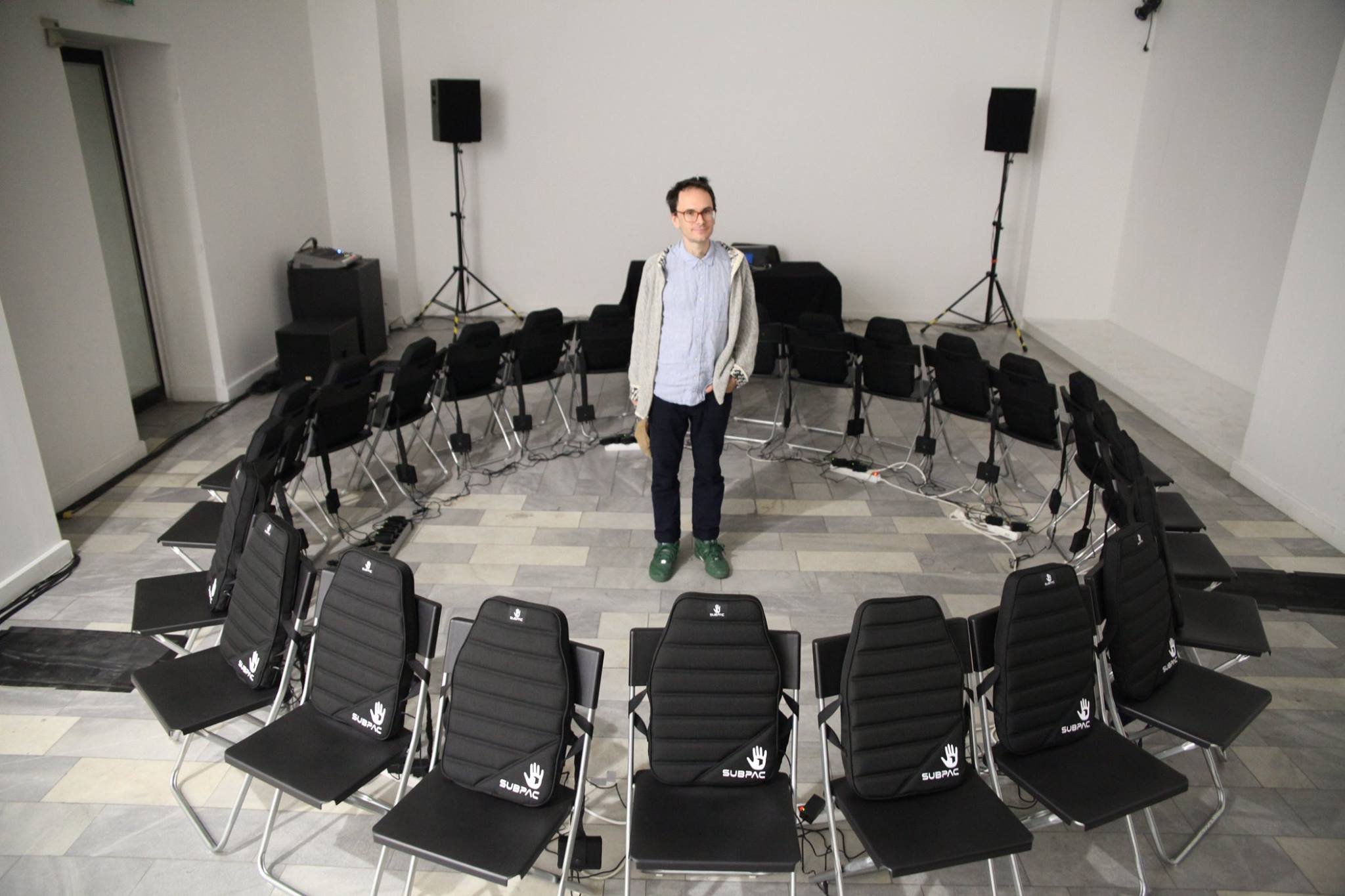 It’s one of those archetypal expressions that has lost some of its initial weight over time: “Anything and everything can be music.” The kind of saying that nowadays results in a shrug from those who have been subjected to it. Luckily for us, Brooklyn-based composer and experimental producer Ben Vida is lending the expression new significance. His work is quantitative in its uniqueness, its otherworldly weirdness, its experimentalist nature. If his critically acclaimed sound poem Tztztztzt Î Í Í, his 2013 multi-media project Slipping Control, or his performance-based collaborative effort with Sara Magenheimer and Michael Bell Smith, Bloopers #o have anything to say about it, anything and everything really can be music. And where Ben is concerned, we’re so glad that that’s a fact.

It’s with this mindset that we embark upon Damaged Particulates, Ben’s latest venture that balances performance art with immersive music listening. An eleven-movement solo composition for fixed and live electronics presented in four channel expanded stereo, Damaged Particulates explores the space between musical representation and sonic abstraction through speech, music, and body. Presented in collaboration with SUBPAC, Ben’s audience will not only hear the music, they’ll feel it too,  benefitting from his performance on three levels: mind, body, soul. Ahead of the Damaged Particulates’ show in Berlin this weekend, we caught up with Ben to talk sound poetry, experimentalism, SUBPAC, and the story behind this project.

Ben, some people might call your music “noise” (in the “Get off my lawn!” kind of way). What would you say to that?

[Laughs] Oh, that’s okay. I am not interested in thinking of what I do as noise or music or anything other than just sound. I mean really, I feel like what I am up to these days has more to do with problem solving or staging little experiments, setting up systems of conceptualizing processes.  The materials that I use to create a piece are usually just the materials that I feel best represent the idea. Often the sound is a byproduct of a process – that can get noisy.  But I like really gross sounds, sounds that read as organic but unwell – I think sometimes they are more humorous than offensive.

In that respect, is it challenging to be a part of the “experimental” genre?

Well, simply keeping the process truly experimental is what’s challenging… Not falling into familiar forms or methodologies. I think there is a sonic aesthetic that people associate with “experimental” work but that is just a surface. Something truly experimental shouldn’t have any one fixed aesthetic language and to continue to re-problematize what one does without things becoming sonically codified is the real challenge.

On that note, you’ve been a part of the music scene for over two decades now but your music is consistently fresh. How do you keep people guessing?

I just keep changing up the way I do things and try to ask new questions. I move around and meet people and access new collaborators who I am always learning from.

I read that your last LP, Slipping Control was written originally as a score or a sound piece, based on something you call concrete poetry. From what I understand, you created the album by running your initial texts through different systems and seeing how they morphed. Can you share a bit about how that works?

Slipping Control is an on going project that is focused on examining the morphing of a material as it goes through different systems on its way to being outputted in a number of unique mediums. I use text as the starting input to be outputted as electronic music, video, books, objects, prints and performances.  The text functions as sound poetry when it is spoken, and concrete poetry when it is printed. It does not keep a fixed form. For the LP version of Slipping Control I took the vocalizations of the text and through a process of extracting control commands from it used those vocalizations as the control source to run an analog synthesizer.

That sounds like an incredible process. What about for Damaged Particulates, what was the creation process like?

For Damaged Particulates I used other methods to control the synths…  My intention with that piece was to create organic sonic gestures but keeping the control sources in the machine realm. I wanted sounds to be almost opaque and to feel as if they might manifest as a physical object and not just as a sound event.

I am using that term to refer to a tradition in poetry where phonetic aspects of speech are the focus of a composition (as opposed to semantic). In regards to Slipping Control I wanted to compose a score to be vocalized that would create pattern and rhythm – that was all I needed the language to communicate. The text has a specific function and communicates this function but not in a traditional linguistic manner.

Moving away from the aural and visual aspects, why is physicality important to music? How do you think feeling bass with something like the SUBPAC changes how we interact with or understand your music?

Well… All music is physical – I mean, we receive sound through physical events in our ears. The SUBPACs help to foreground this physicality by redirecting the physical place of reception. Direct bass is understood by touch first – it reorders the senses: touch before hearing.

One thing you talk also talk about often is the idea of “recalibrating our ears.” Does a device like the SUBPAC recalibrate our bodies?

This idea of recalibration has to do with presenting sound materials that challenge and engage a listener, with the intention of reminding them of how well they are able to receive and decode complex sonic materials. The recalibration that might occur in a performance space or gallery is brought back out into the everyday world.  The SUBPACs can add another layer to this.  After experiencing Damaged Particulates with the SUBPACs I can imagine that a ride on the subway could become an aestheticized experience.

Has it been difficult to cultivate a language between your music and the SUBPACs, or has the experience been a relatively natural one?

No, no – I just think of the SUBPACs as another voice within the composition. An independent voice that runs parallel to the sonic materials coming out of the PA. This was a totally fun and interesting way to work.

What about the space you’ll be performing in? How will you be using it to your advantage (or not) as a performer?

I actually haven’t been to the spaces (in Berlin or Krakow) so I can’t say for sure… But I do try to create very resilient sounds that can activate and withstand all kinds of different settings and PA’s.

Of course. I’m really looking forward to seeing what you’ve come up with this weekend. You’ve previously said that what matters is not the tools, but how you use them. What’s one tool you’re using in a new or special way?

[Laughs] Jeez, I’m not sure I am using any tools in a special manner! Right now, though, I am enjoying using a hybridized analog/digital synthesizing system where control sources are generated in both the analog and digital realm, creating a strange and imperfect circuit of translations.

Very cool. And finally, what is your favourite non-musical sound?

Hmm… Really loud sounds from a great distance so that they sound soft!